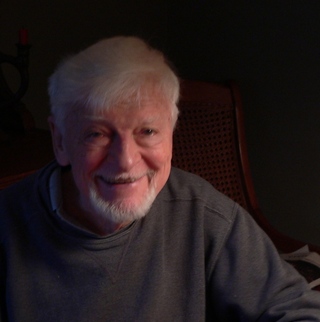 Ralph Salisbury, Professor Emeritus of the University of Oregon, is the author of 11 books of poetry, 3 books of short fiction, and a just-published, prize-winning memoir. His poetry titles include Like the Sun in Storm; Light From a Bullet Hole: Poems New and Selected; Blind Pumper at the Well; War in the Genes; Rainbows of Stone; A White Rainbow; Going to the Water: Poems of a Cherokee Heritage; Spirit Beast Chant; Pointing at the Rainbow; Ghost Grapefruit and Other Poems; and Poesie Da Un Retaggio Cherokee (Multimedia Edizioni, Salerno, Italy). His short fiction titles include The Indian Who Bombed Berlin; The Last Rattlesnake Throw; and One Indian and Two Chiefs. His memoir, titled So Far, So Good, focuses on growing up on an Iowa farm during the Great Depression; on his Cherokee-Shawnee-English-Irish-American heritage; and on the power of constant warfare to shape all of our lives.

He has received many awards, among them a Rockefeller Foundation Residency at the Villa Serbelloni, Bellagio, Italy; the Chapelbrook Award; the Northwest Poetry Award; three Fulbright professorships to Germany and Norway; and an Amparts (USIS) lectureship in India. So Far, So Good received the 2012 RiverTeeth Literary Nonfiction Book Prize. Spirit Beast Chant (Blue Cloud Press) has been reprinted in English, in Bombay, by the U.S. Cultural Affairs Agency, then translated into Hindi, Urdu and Bengali. In selecting Rainbows of Stone, as an Oregon Book Award finalist, judge Maxine Kumin wrote, ‘Nature in Ralph Salisbury's conception is a Presence to be addressed. I was drawn especially to such poems as "Oil Spill Spreading," "Family Task, 4th Year," and "This Is My Death Dream." This is a poet dedicated to keeping his heritage alive. His book deserves a broad audience.’

Born of a Cherokee story-teller, singer father and a story-telling Irish American mother, Ralph Salisbury grew up hunting and trapping, for meat and pelts, and working on a family farm, which had no electricity or running water but was reachable by a dirt road. When he visited his father's mother, the only road was a footpath along a creek. Through World War Two service, he earned six years of university education, and has worked at writing, editing, translating and teaching writing and literature from 1950 to the present. He has continuously published poems and fiction - in the United States, Great Britain, Canada, Germany, Italy, Norway, France and India - since his twenty-first year.

For six years the editor-in-chief of Northwest Review, Salisbury also has edited A Nation Within, an anthology of contemporary Native American writing (Outriggers Press, New Zealand), and has co-translated two books by Sami (Lapp) poet Nils-Aslak Valkeappaa: The Trekways of the Wind (University of Arizona Press) and The Sun My Father (University of Washington Press).

Besides the University of Oregon, where he has taught since 1960, Ralph Salisbury has taught at Drake University, Texas A & M University, and the University of Frankfurt/Main (Germany). He has been featured on radio and television, and he has given many readings and workshops for universities, public schools and cultural organizations across the United States and abroad. For praise of his teaching, see “A Writing Fool,’ p 79, Newsweek, November 23, 1999, reprinted in The Readers Digest, August 2000.

The father of three grown children, and the grandfather of four, he lives in Eugene, Oregon, with his wife, poet and writer Ingrid Wendt.

Dedicated, as he says, to the Tribe of the World, Ralph Salisbury comments: “Though I have lived and worked among the intelligentsia of many nations, my writing comes from having lived as a questing, mixed-race, working-class individual in a violent world, and my work is offered to the spirit of human goodness, which unites all people in the eternal struggle against evil, a struggle to prevail against global extinction.”

So Far, So Good (Memoir)
“Ralph Salisbury’s So Far, So Good will take its place beside Scott Momaday’s
The Names and Joy Harjo’s Crazy Brave as a major addition to the evergrowing genre of contemporary Native American autobiography.”—Geary Hobson

Like the Sun in Storm
The manifest destiny of these poems is justice and salvation in language for people torn down by blind nationalism, war, greed and racism. As soft as lingerie, as tough as steel pipe, and as fine in phrase and image as our best American poets, Ralph Salisbury sings "Like the Sun in Storm" for a world that can be healed. --Henry Hughes
Light From a Bullet Hole: Poems New and Selected
"The poems of this volume make stunningly clear the ways in which Ralph Salisbury continues to model the traditional and modern (postmodern, if you will) roles of the poet as Cherokee humanist and indigenous cosmopolitan." -- Arnold Krupat
Blind Pumper at the Well
"It’s great to see the energy of an 80-year-old poet at work. Mixing WWII memories with his observations of the peaceful world outside his study windows, these poems celebrate longevity and unflagging concern for peace." -- Diane Wakoski
War in the Genes
"Salisbury writes out of the passion, rage, and lyricism that mark the Native American spirit in these blasphemous times."
- Paula Gunn Allen
Rainbows of Stone
Finalist, Oregon Book Award. “A magnificent summa from a superb artist.”
-Louis Owens
Going to the Water
“The words of Going to the Water: Poems of a Cherokee Heritage ‘do it right’. They hit hard. And they must be heard. Listen.”
-Simon Ortiz

The Indian Who Bombed Berlin and Other Stories
Salisbury excavates the hearts and minds of his characters, mining them to fuel his stories. And his stories are the richer for it — invariably compelling and continually surprising. (MSU Press)
The Last Rattlesnake Throw and Other Stories
“...unique in tone and voice, unlike the voice of any other American Indian writer writing today.”
-Gordon Henry
Loading…}