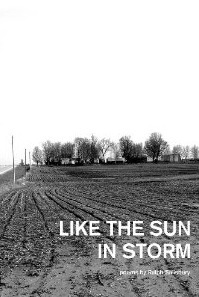 I'm holding onto history,
someone else's sanity,
after the crash.
Those three lines sum up for me what I have always loved about Ralph Salisbury as a poet—one whose vision has grown stronger with age. Clarity and complexity are as intertwined in his work as is his mixed Cherokee-Shawnee-English-Irish ancestry and his own path as a youthful warrior and a wise elder counseling peace. His words are those of a man struck by lightning, both literally and figuratively, and the sanity that he holds onto and forces us to face, is that of one whose survival is both metaphor and guide for the generations that follow.

Ralph Salisbury's Like the Sun in Storm is a great eagle-soaring sweep of poetry. In these times of wars and suffering, his poems give powerful voice to that which too many people ignore or are afraid to speak about or are too brainwashed to recognize. Like the Sun in Storm is beautiful, brilliant, true ... an assuaging of a deep homesickness for that which shimmers with honesty and heart wisdom. This Cherokee-Shawnee elder's poems brilliantly distill home and shelter out of the violent complexity of America's and the entire planet's current frightening reality/surreality. Ralph, beloved poet and brother, thank you/nya'weh for this saving poetry.

The manifest destiny of these poems is justice and salvation in language for people torn down by blind nationalism, war, greed and racism. As soft as lingerie, as tough as steel pipe, and as fine in phrase and image as our best American poets, Ralph Salisbury sings "Like the Sun in Storm" for a world that can be healed.

There was a place
where the big kids let me hide, the space
too small for any of them,
between a white lilac and one
like the sun in storm
or the blood of a butchered pig
darkened by earth, and when
the game was done
and everyone else had got caught
I stayed and still stay
in the nest of the big one's willingness
to let me become
the pretend child of all of them
and the sense that the world--
despite some slaps and the occasional
crunch of knuckles against teeth
and my brother being sent to war–
could be really good.

"Coffins Sliding Like Kids' Sleds Down"
(From my wife's father's story.)

This view-home’s sundown side’s whole wall
a window as clear as a waterfall,
glistens of coffins sliding like kids' sleds down
a street earthquake wrenched steep
were what memory made
my wife’s father make
of our valley's other side's lights’
glacier glitters, and, though
turbine tornados herd melted snow's stampede-flow
into tungsten’s blind canyons,
only the lightning strike
from which I stumbled upright illuminates
this page, on which
the father of the mother of my daughter slides
beyond words wrenched deep, as years
before and beyond my few collide.

Awakening, beneath pines,
where a border of earth
the river dried from
gives thanks to rain,

I hear the lovely and loving chatter
my daughter's year old daughter sends
through silicon crystals
transmitted into eons of green
metamorphosed into petroleum
reborn as plastic, and, yes, into the centuries
of families which formed my ear.