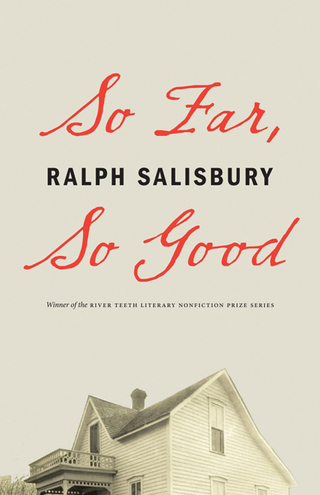 Winner of the River Teeth Literary Nonfiction Prize, this compelling memoir takes us from abject poverty in rural Iowa during the Great Depression, with a half Cherokee-Shawnee father and an Irish American mother, through war and peace and protest to the freedom and solace of university life. The survivor of a lightning strike, car and plane mishaps, explosions, bullets, a heart attack, cancer, and other human afflictions, Salisbury wonders: “Why should anyone read this?” The book itself resoundingly answers this question not merely with its sheer eventfulness but also in the prodigious telling.

"An important glimpse into 20th-century Midwestern life, this book will also be an important addition to the canon of Native American literature."
—Library Journal

“A Native American, a Vanishing American, Ralph Salisbury writes of a
vanishing life, but in this brave and startling memoir, it is the life of a poetwarrior
that will never be forgotten.”
—Patty Dann, author of Mermaids

“Ralph Salisbury’s So Far, So Good will take its place beside Scott Momaday’s The Names and Joy Harjo’s Crazy Brave as a major addition to the evergrowing genre of contemporary Native American autobiography.”
—Geary Hobson, author of Plain of Jars and Other Stories

Sample from So Far, So Good

Bullet-shattered glass clattering onto my baby bed, I awake and cry, into darkness, for help.

Do I remember this? Or do I remember being told? I will feel it, whichever it is. I will feel it, chill bomb-bay wind buffeting my eighteen-year-old body, a mile above an old volcano’s jagged debris; feel it, seeing photos of Jewish concentration camp children, huddled together for warmth, photos of Korean orphans, huddled together, homeless in blizzard after American bombing -- bombing in which, 25, I had refused an order to join.

Ma snatches my blanket-swaddled body up, to shield me against whatever might come next, and glass shards pierce her arms. Pa lunges out into the night, gripping a pistol, with which he'd once wounded an armed robber and had too many times drunkenly terrorized his own family.

Pa, alert to shoot whoever is attacking our home, finds only snow -- snow a mass killer, which will, scientists tell us, bury the last child to be born on earth.

Bombs exploding, hundreds of babies cremated alive – what did my experience of the world's violence amount to really? A racially motivated harassment? A neighborhood grudge? Or, maybe, a drunken young stranger saw our dimly-lighted farmhouse windows as an opportunity to outdo pals, who’d shot holes into road signs, meant to keep people from being lost or from losing their lives on dangerous curves.

A drive-by shooting — a mystery.

A ride-by shooting — motivation: an Easterner's urge to imitate fictional Wild West heroes, by aiming out of a train window and killing a buffalo or an Indian.
I think of my brother Bob’s telling me that another American soldier shot an Arab off his horse, in Algeria, during WWII, just for the hell of it.

In this rambling, free-associational placement of electronic impulse on screen, ink on page, there will be some accounts of terror and death. Few compared to those on TV news but more than I, or you, might wish.
A survivor of one lightning strike, some car and plane mishaps, some explosions, a few bullets, a heart attack, cancer and other human afflictions, I ask myself, as readers may well be asking, why should anyone read this?

Maybe for warnings implicit in my confessed mistakes. Maybe for what little wisdom my many years have bestowed. Maybe for the story of someone who grew up without indoor plumbing or electricity and worked — despite hunger — in often above 100 degree heat and often 30 below zero cold, from lantern-lit pre-dawn to lantern-lit late night, on a Mississippi River Valley farm, beside a narrow, dusty, muddy or snow-choked dirt wagon trail, which had become an auto road.

If you had walked that road with me from my fourth through my eleventh year — stamping with one booted heel, maybe, to crack yesterday’s footprint’s ice into zig-zag lightning — you would have found yourself in a one-room school’s smells of chalk dust, glue and the seldom bathed bodies of children.

If you had joined me in visiting my father’s mother, you would have hiked several miles along a creek, on a generations-worn footpath, until you reached the small hill farm, to which our outgunned and outnumbered Cherokee-Shawnee forebears had fled, abandoning rich valley plantations to murderous, government-sanctioned mobs.

Someone who hunted, first, with bow and arrow and, then, starting at age twelve, with rifle and shotgun, and helped to keep his family alive, I might belong in a museum, among stuffed animals, but I have learned to use this computer, more complex than those with which I aimed the cannon and machine-guns of a B-29 bomber — same type plane as the two which ended lives in Hiroshima and Nagasaki and changed all of our lives.

I was seventeen when I enlisted in what was then the Army Air Corps. I was 20 when World War Two ended, and I was 25 when I refused orders to join in the fire-bombing of North Korean cities and only escaped prison because a computer failed to extend my enlistment and sent my World War Two honorable discharge the week before I was to be arrested. Seventy five now, in a year when Muslim martyrs’ suicide attacks have destroyed the U.S. World Trade Center and much of the Pentagon and killed thousands, I have started this day, as I have started most days for most of my life, by trying to write.

Yesterday, I would have given the honest answer Socrates was executed for giving to most questions worth asking, "I do not know."

Today, my life — and the lives of all living things — soon to end, I do know why I am beginning to try to write a hop-skip-and-jumps-and-maybe-some-dancing memoir. My daughter, to whom I read or told stories nearly every night of her childhood, has asked me to put some of our family's realities down, with no fictionalizing and no poeticizing, just things as they were. I am trying, although, for most of my life, I have depended on imagination as an astronaut depends on a heat shield, imagination protecting me from the painful realities I have needed to reenter.

Free association, spontaneity, a wholeness of the moment, a union of past and present, of childhood and after — these are what I seek, and the result may be as random and unorganized as my bank account and my life. Whether or not I live to finish and publish this manuscript, here are some memories of a poverty-stricken, malnourished, sometimes nearly fatally ill, and mostly mysteriously happy child, memories of a mixed-race, somewhat educated world citizen and memories of an individual seeking what seems to be best for himself, for his loved ones and for other individuals.

Whatever is here I offer to the world, knowing that my life is but one of a multitude of lives, all doomed to undergo change and, I believe, to go on and on, in the Great Plan, which, perhaps, we humans can, in our best moments, somewhat sense.