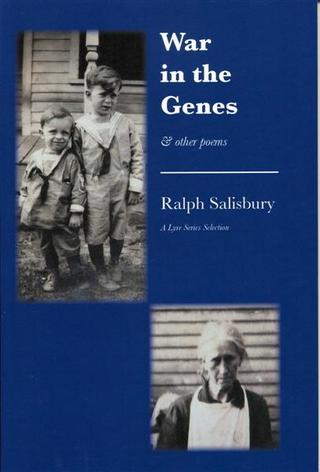 From War in the Genes

The plum tree scratching hundreds of matches
against
a sky as black as the ceiling I'll stare at
more centuries than I can say, my mother comes,
summoned to cries of children frightened by
lightning,

as her mother came,
not screaming from cancer gnawing intestines but
calm
and giving me cookies, a substitute grandma the one
resurrection my Christian mom could offer her "Wild
Indian" son, who was four
and bored by all the lovey talk and strangers' names
and finally stole some matches, which,
when hit with rocks, cracked like cap-pistol shots –

Dad drunk and shooting at ghosts again
myself my mother's "little man"
begging him to behave.

He grew quiet, then
quieter still,
too quiet now for his kid,
whose days of naughtiness – or most
or some – have gone
into wish for understanding.

The pear belongs to the grandmother next door,
who lit – years freeing her
from city safety-laws – Mexican rockets,
last Fourth of July, liberating sky
over Monroe Street, Madison, Jefferson and

She's five this fall,
her birthday candle flames
leaves of the plum,
aeons of wishes starring a black cloud sky.


Medicine-Meeting, Hoopa, 1994
for Helen and Chad

my skin, like the skins
of many of them, the skin
of soldiers who tore
futures not rightfully theirs
from the genes of defeated populations –

and words of love,
to raise the dead

in children's dreams
of living as women and men.

for my daughter, Martina

Oregon coastal cannon could not still
One from a submarine, and a Sunday school class,
Was sent to heaven because we
Machine-gunners, training to kill
Others, who'd try to down our bombers, had failed to    see
A Japanese balloon, as it had descended, bearing   bombs
Intended to burn acres and acres of
Billions of dollars worth of centuries of trees,
Whose great grandparents were not even cones
when
A galleon, hold empty for gold, sailed
Further offshore than any spear could reach
And cannonaded villages,
Which might have resisted invasion.

As steadfast as those sacrificing lives
To their conception of God, my countrymen
Are offering what syllables as beautiful as petals,
Wilting, have always said, and,
Recalling Nazi firing squads'
Eliminating future sabotage, I take
No satisfaction from Afghanistan's or
Iraq’s destruction. Instead, I hear the dead,
Whose deaths I and millions of my generation
intended,
Their homes, blown into tombs, become
The sorrowing tones of a friend,
The conquerors' – our – language now his.

At 17, a volunteer, at 25, a resister, I lived
By the words of orators.
At 75, survivor of a heart attack
And cancer, I heed the silence of thousands in
My daughter's voice,
Phoning, three miles from explosions, to reassure
Her mother and me
Just after the World Trade Center went down.


Age 77, I Climb to Indian Ridge’s Fire-Lookout Tower and Search for Lineage

Gestated from sand and fires
as fierce as those mating smoke
with clouds near here, glass walls,
although as clear as poets or parents alert
for danger, seem siblings of old volcanoes' stone.

Ink an eruption, of dew-drop dimension, I find
a closer kinship with the wooden tower's chronology's
sagas of growth-rings, still being written by cones
below this peak, but, generations of giant pines
charred to the roots, living flesh cooked to the hoofs
or claws in my brain, and any human's life
possibly only this moment, between hate
and other mistakes and love and eternity,
my family's history to date's final dot's a bee,
as black as a cindered earth, orbiting sun
in a crimson blossom, doomed
but yet a promise of centuries
of beauty for grandchildren soon to be born.

After Heart-Bypass Surgery, Another Ritual for Continuing Struggle

To save my heart, veins,
from legs which paraded through World War Two,
have,
like loyal royal guards, been sent to higher ground,
delaying overthrow,

but two big dogs, teeth sharper than pen, intend to
end
my history, the foot trying to defend
weakened, from redeployment of blood, and shod with     soft
rubber – from trees French Legionnaires ordered
planted
by Indo-Chinese, tapped now by Vietnamese,
supplying an American corporation named, for
victory, Nike.

Heedlessly – or, as historians say of our country –
"terribly" young, the dogs' companions demand
reassurance that lack of licenses, leashes and
rabies-inoculations won’t end
their best friends' freedom.

Never, in my grim time, so young,
I place my plight with that
of buffalo hunted, not for food but for fun,
to near extinction and with that
of my Cherokee forebears,

and keep carefully quiet, until,
again beyond the reach of jaws
stronger than mine, I seize,
between worn, grave-spade-shape
Vanishing American incisors,
my right to whine, to growl, to warn, to bite and to
the next breath.


Caring for the Soon to be Born

This, for all I can know, my last breath
of our ever more poisonous atmosphere,
to be shaped into word or not,
I hear bulls' bellowing survival intentions,
and write that my father wrote,
on the walls of our barn, the times
of colossal matings and the times
when calves would have to be –
following centuries of bovine captivity,
for humans' prolonged nursing – tugged free
from exhausted cows and rubbed dry and warm,
with "gunny-sacks,"
named for the ones bulged by powder for cannon to
kill
millions of my Native American people.

Emerging, paired, as if in prayer,
to be grasped by helpful hands, small hoofs,
glistening like seashells,
made deep prints in my brain,
which puberty had turned into Science class's primal-mud,

and, now, a final heartbeat likely to leave
grandchildren and poems not yet formed,
I write that: stub-pencil sharpened on trigger-finger    nail,
Dad scribbled as devotedly as he had strummed
the strings of his banjo, for crowd after crowd,
and, then, for my mom
and for five children, until
applause, stampeding hoofs or cannonade
stilled in his chest, he left me,
to scribble the times
of destinies, which would –
war not yet nuclear – be born.


A Coastal Temple Ruin, 1992
For Octavio Paz and Cesar Vallejo